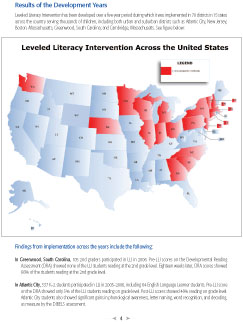 Leveled Literacy Intervention has been developed over a five-year period during which it was implemented in 70 districts in 15 states across the country serving thousands of children, including both urban and suburban districts such as Atlantic City, New Jersey; Boston, Massachusetts; Greenwood, South Carolina; and Cambridge, Massachusetts. This figure depicts the study results.